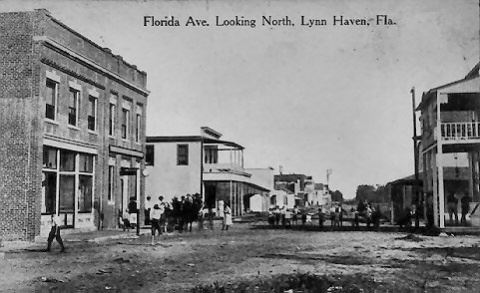 Lynn Haven was established in 1911 as the third of three Union Veterans Colonies in the South. Fitzgerald, Georgia was established in 1896. St. Cloud, Florida was established in 1909. Although each of the three “Old Soldiers Colonies” was organized separately by independent development companies, each site was chosen for “health, climate and productiveness of the soil” and each recruited future land owners through the use of The National Tribune, a newspaper of the Grand Army of the Republic veterans’ organization.

These three men purchased large tracts of land to the east and to the north of Panama City and hoped to use the nucleus of that small city to build a much larger community. That idea was met with much resistance so they then turned their sights to the vast areas of “cut over timber lands” along the northern arm of St. Andrews Bay where Andrew Jackson Gay had already created a small community referred to as “Gay, Florida,” site of today’s Panama Country Club.

Opening Up for Settlement

While the actual location of the “new soldiers’ colony” was not announced until late December 1910, large numbers of Union Veterans had already started the trek down to North Florida to be ready for the opening of the new settlement. On January 11, 1911 the first offerings of land in the new “Lynn Haven” took place. One “town lot” and a five-acre plot outside of the new colony were offered as a package for just $150.

The “City of Lynn Haven - 1911 Plat Map” was surveyed and laid out in even “lots and blocks” - avenues running north to south were named for states and streets running east to west were numbered. That first year all land sales in Lynn Haven were offered “by lottery” - actual sites could not be selected by the prospective buyers.

The first house/store building was erected on March 10, 1911 and others followed in rapid succession. In June 1911 the town boasted a population of around 200 residents but by the end of December 1911 more than 1,200 people called Lynn Haven “home”.

Although the St. Andrews Bay Development Company offered free lots for the building of churches and schools, it was up to the new citizens to supply the means to build them. By the end of the first year more than 200 homes had been built and others were arriving daily to order lumber and materials to build more.

The community formed civic and social organizations, built a new school and churches but had no organized government until 1913 when the first “town council” was incorporated and elected. As the primary source of income for most of the G.A.R. veterans was their monthly pension check, the need to establish new businesses and industry was critical.

The Lynn Haven Bank and Trust Company was built and opened by the owners of the St. Andrews Bay Development Company in early 1912. Its first few years were successful but discrepancies in the organization caused the State Bank Auditors to close it down in 1915. This caused a great hardship for the new town. The development company also failed to pay taxes and the building of infrastructure and roads fell directly to the residents.

The “old soldiers” were of an advanced age by the time they came to Lynn Haven and each year the “last roll call” diminished the population. The original 1913 “town council charter” was found to contain legal flaws and was reorganized in 1915 and again in 1917. By 1917, the St. Andrews Bay Development Company was unable to meet the large bank loans due to New York and the company went into receivership.

Minor C. Keith, President of the United Fruit Company was also a brother-in-law to W. H. Lynn and in 1917 he acquired huge amounts of the former development company’s assets. He also acquired huge tracts of land around the area of Panama City formerly owned by R. L. McKenzie and A. J. Gay. Keith and his millions are credited with “putting Bay County on the map” as he also purchased the railroad, the area’s mills, over two hundred thousand acres of land, built both the Lynn Haven Hotel and the Pines Hotel in Panama City and developed and constructed the new golf course on North Bay.

By 1920, the whole country was experiencing financial difficulties. By the mid-1920s, the “boom” was back on and land all over Bay County was selling for record amounts. Lynn Haven experienced a “second colonization” when large numbers of Spanish American War veterans also came to Lynn Haven.

Lynn Haven valiantly tried to organize a “city charter” and in 1922 a special session of the Florida Legislature finally approved a new “city charter” election for Lynn Haven. When the Depression Years came the bustling city of Lynn Haven struggled for survival and hung on through the “dark days.” By the World War II years Lynn Haven once again began to grow and prosper. Since the 1970s Lynn Haven has taken its rightful place as the “second largest city in Bay County” and new businesses and industries have grown and prospered.

A Great Place to Live

The earliest residents of Lynn Haven came primarily from the North but they soon called Northwest Florida “home.” Thousands of today’s residents are descended from those same “Old Settlers” and the same determination to keep “Lynn Haven - A Great Place to Live!” is still alive and well.