Union veterans founded Lynn Haven. W.H Lynn, editor of the G.A.R. National Tribune was the driving force in promoting the town. The W.H. Lynn company donated several lots between 8th and 9th Streets and Georgia Avenue to the Ladies Auxiliary of the G.A.R. A hall was soon erected. Once the hall was in place Union veterans, lead by Lynn Haven Mayor W.H. Krape began planning a memorial to all Union veterans.

The hall was destroyed by fire in 1916 but work on the memorial continued. Members donated a small portion of their pensions monthly to the project, and, by 1920 enough money had been raised for construction. The Mullins Company in Salem, Ohio was selected to create a statue of a Union soldier holding a musket. The finished statue was delivered in the same year. He was placed on a pedestal - forty feet above the ground - facing north.

Mayor Krape spoke at the dedication of the statue, 'I lay this cornerstone as a tribute to our union soldiers, living and dead whether in the Infantry, Cavalry, Artillery or Navy'. Plaques were placed on the four sides of the base of the statue, to the north 'Monument in memory of the Union soldiers of the Civil War - 1861 to 1865.'

The west plaque has 'The American Creed.' The south plaque reads 'Grand Army of the Republic'. The east plaque contains information about families of Lynn Haven veterans. This monument is only one south of the Mason-Dixon Line honoring a Union soldier. It has been featured in Ripley's Believe It Or Not. 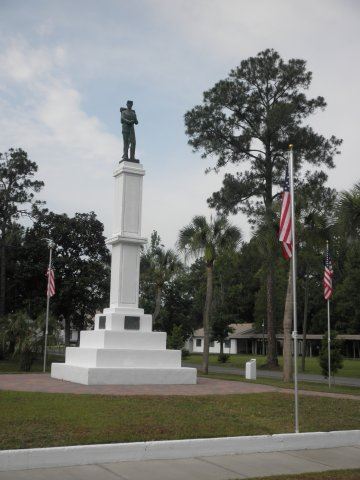